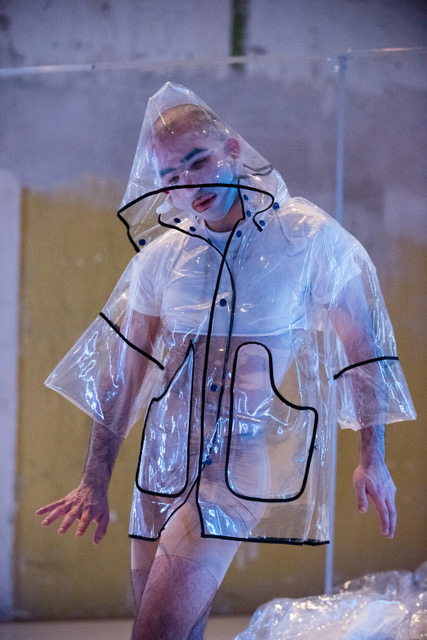 “It is as if [Machado], with his whole body, is trying to create another room, independently of the actual room we find ourselves in, here and now. A room just as imaginary as it is tangible.” [Thomas Olsson/nummer.se]

With an education in Dance and Visual Arts, his works develop from the crossing point of these two areas: were the concrete gesture of plastic construction of objects, spaces and bodies is reclaimed and worked as choreographic material. In a post somatic perspective and caring about bodies that do not conceive, perform or imagine themselves as they are medically described, Machado works with mutating bodies that dance not from the bodies they have but from the extra material psychedelic bodies they imagine and claim for themselves.

Born in Porto in 1987. Based in Stockholm since 2012. Machado creates work as a choreographer since 2007. Holds the MA Choreography DOCH (Stockholm) directed by Jefta Van Dinther / Frederic Gies; Finished the Independent Studies Program at Maumaus – Visual Arts (Lisbon) led by Jürgen Boch; Holds the BA in Theatre by ESTC (Lisbon); Studied Ballet and Contemporary dance at Balleteatro (Porto) from 1994 to 2002. His work Site Specific For Nowhere was performed weekly throughout the whole duration of Moderna Museet’s quadrennial Modernautställningen 2018; In 2013 he received the life Long Burning co-production by CullbergBallet for his project Black Cats Can See In The Dark But Are Not Seen. The work was performed within the [8:tension] series at ImPulsTanz 2014. From his education underlines the contact with Olga Mesa, Francisco Camacho, Vera Mantero, Teatro Praga, Jennifer Lacey, Robert Stein, Janez Jansa, Paz Rojo, Lito Walkey, Norberto Llopis Segarra, Sandra Noeth, Jefta Van Dinther, Frederic Gies, Alice Chauchat, Eric Duyckaerts and Juan Dominguez. Machado was part of research residencies like Encontros Rumo mediated by Vera Mantero, Mugatxoan directed by Blanca Calvo and Ion Monduate and AWaRE at Festival Alkantara 2014 mediated by Sofia Dias and Vitor Roriz. Machado worked as a performer with Rachel Tess, DD Dorvillier, Michael Kliën, Trisha Brown Dance Company, among others. In collaboration with the Swedish visual Artist Conny Karlsson Lundgren developed the videos “(Dissident) Dance Actions” (2017) exhibited at Moderna Museet Malmö, and “Gesture / Labor / Leisure” (2018) exhibited at Haninge Kulturhus. In 2017 in collaboration with the dance artist Anna Koch created a performance presented at the opening of the first exhibition of the curatorial program of Corina Oprea for Konsthall C. In 2018 developed the video collaboration “Scener härifrån” with the visual artist Sebastian Dalqvist shown at Art Lab Gnesta.

Machado works as choreographer since 2007. His works were performed in Sweden at WELD, Moderna Museet, MDT, Konsthall C in Stockholm, Röda Sten Konsthall and Skogen in Gothenburg, MARC in Kivik, Wånas Konst in Simrishamn, Väven in Umeå, Vitlycke Performing Arts Centre, Inter Arts Centre and Skånes Konstförening in Malmo, Norrköpings Konstmuseum, Skissernas Museum and Stenkrossen in Lund. Internationally his work was performed in Austria, Croatia, Uruguay, France, Sweden, Germany, England, Argentina, Chile, Brazil and Portugal in contexts as ImpulsTanz, Weld, Dance 4, Chelsea Theatre, FIDCU, NAVE, Festival Arqueologias Del Futuro, ZDB/Negócio, METAL, Chisenhale, Colchester Arts Centre, Rivoli, CCB, Festival DDD, Citemor, AGORA, Reflektor M, among many others. He is an associated Artist of Weld in Stockholm. Machado was part of the board of Interim Kultur, between 2012 and 2014 and is since 2014 part of the board of the MARC invited by its artistic director Rachel Tess.